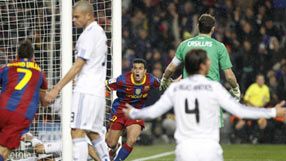 In a festival atmosphere at their rain-lashed Nou Camp stadium, the Barca players entertained their ecstatic fans with a breathtaking display of free-flowing football that left Real's array of expensive talent chasing the ball for long periods.

GEAR:£5 off Barcelona and Real Madrid shirtswith Kitbag. Free delivery on orders over £40

Watched by millions around the world, it was the Catalan club's most emphatic victory in Spain's "Clasico" since Cruyff's all-conquering side, featuring current coach Pep Guardiola, thrashed Real 5-0 in the 1993-94 season.

It also put a severe dent in Real's resurgence under new coach Jose Mourinho, a former assistant at Barca who had led his side into the match undefeated in all competitions.

Xavi and Pedro struck early to put Barca 2-0 up before David Villa scored in the 55th and 58th minutes to raise the noise levels to a deafening pitch.

Substitute Jeffren added a fifth in stoppage-time and Real defender Sergio Ramos was sent off for a badly-timed challenge on Lionel Messi at the death.

"Today Barca were far superior and enjoyed playing in its own style," Spain striker Villa said in a television interview.

"Madrid did not feel at ease and did not know how to, or could not I think, dominate the midfield which is the strength of our team," he added.

"We are two points clear, very happy, but we have to continue working as we are only in November and we need to carry on winning."

The eagerly-anticipated clash between the world's two richest clubs was seen as a first genuine test of Real's resurgence under Portuguese Mourinho.

Featuring 13 players from Spain's World Cup-winning squad, eight from Barca and five from Real, it also pitted Barca's Argentina forward Messi against the man he succeeded as World Player of the Year, Real's Cristiano Ronaldo.

The champions dominated from the start on a slick playing surface that favoured their swift passing game, with Real sitting back and looking to strike on the counter.

Messi curled a shot against the post in the sixth minute and after the home side went ahead four minutes later they never looked back.

Xavi was played in by Spain team-mate Andres Iniesta and he lifted the ball neatly over Iker Casillas from close range.

The Spain midfielder was dictating the play and was instrumental in Barca's second in the 18th.

He sprayed the ball wide to Villa and Casillas could only palm his cross into the path of Pedro who gleefully sidefooted home.

Messi totally outshone Ronaldo and carved open the visitors' defence for both of Villa's goals as well as coming close to scoring several times in the second half.

Villa beat Casillas with a powerful angled shot for his first in the 55th and sped clear to add his second three minutes later, netting with the outside of his boot as his internatioal team mate rushed off his line.

Real barely threatened the goal of Victor Valdes and after Jeffren had made it five their dejected players trudged off to leave the Barca fans celebrating a fifth-straight "Clasico" win.

Mourinho, hired from Inter Milan to end Barca's two-year reign as Spanish champions, has now failed to win a match at the Nou Camp in six attempts, including three defea