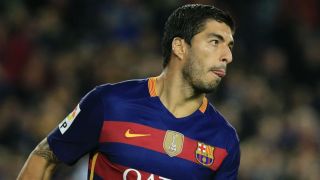 Luis Suarez's two-match ban in the Copa del Rey has been upheld by the Spanish Administrative Tribunal for Sport (TAD) following a second Barcelona appeal.

The Uruguay striker was sanctioned for his involvement in a post-match altercation following Barca's 4-1 first-leg victory in their Copa quarter-final against rivals Espanyol.

After a game that saw Hernan Perez and Pape Diop sent off, Suarez was handed a two-game suspension after referee Juan Martinez Munuera's report accused him of provoking a confrontation between players from both clubs in the tunnel.

Suarez missed the second leg against Espanyol after Barca saw their first appeal rejected by the Spanish Football Federation and was left out of the squad for Wednesday's semi-final first leg against Athletic Bilbao.

The 28-year-old  will now complete his suspension on Wednesday after Barca's appeal to TAD was also turned down.