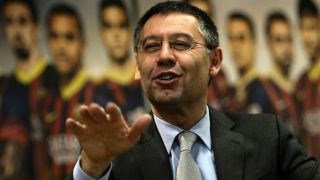 Since the takeover by Qatar Sports Investments, PSG have become the powerhouse of French football. They are on course to win Ligue 1 for a fourth season in a row, already holding a 21-point lead over nearest rivals Monaco.

Laurent Blanc's side have also made it through to the knockout stages of the Champions League this season, and will take on Chelsea in the last 16 of the competition.

Barcelona are the reigning champions of Europe, but Bartomeu feels PSG will be challenging for the coveted trophy in the near future.

"It is a beautiful work that Qatar and Nasser [Al-Khelaïfi, PSG president] are doing," he told France Football.

"In France it is said that a good wine is a great vintage. Well, PSG is already one of the great vintages of European football, and they did it in no time.

"There is still work to do, especially at the base level, in youth football.

"But, one day soon, PSG will be in the final of the Champions League."