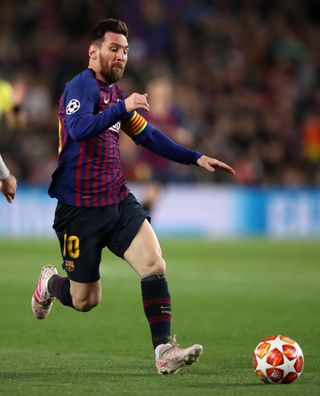 Ernesto Valverde insists he will not rush Lionel Messi back before he is ready as Barcelona face up to the prospect of being without their talisman for another week.

Messi has yet to play this campaign after suffering a calf strain during pre-season and is definitely sidelined for Saturday’s visit of Valencia and may also miss Tuesday’s Champions League opener against Borussia Dortmund.

Without their record-breaking forward, Barca have only managed to win one of their opening three LaLiga matches, with a 5-2 home victory over Real Betis coming in-between a defeat at Athletic Bilbao and draw with Osasuna.

🔊 Valverde: "Despite the injuries, we have a good enough squad to tackle the challenges that lay ahead. We're taking it one game at a time." pic.twitter.com/MF2NMOdEV9— FC Barcelona (@FCBarcelona) September 13, 2019

However, Barca coach Valverde is adamant he will only bring Messi back when he is fit and ready, and says the Argentinian’s absence gives other players in his star-studded squad a chance to shine.

He told a press conference: “Of course Messi’s a very important player for us, I’m not going to deny it, but the team have responded well in other games which he hasn’t played in.

“But he’s a decisive player. He can change games because of how he affects our team and the opposition. He’s the best player in the world.

“I don’t know if he will be ready for Tuesday. I don’t want to create any expectations. It’s difficult.”

He added “Missing Leo Messi is always going to be noticed but it means chances and opportunities for other players to step forward. We saw that against Betis.”

The good news for Valverde is that striker Luis Suarez is available again after being absent since the opening-day defeat to Athletic.

The Spanish champions will come up against a familiar face in the Valencia dugout this weekend, with their former midfielder Albert Celades having been appointed Los Che coach on Wednesday.

Barcelona-born Celades, who spent almost a decade on the books of his home-town club before leaving in 1999, took over the reins following the sacking of Marcelino.

Like Barca, Valencia have also picked up four points from their opening three games and Celades is hoping they can add to that tally on his return to the Nou Camp.

He said on his club’s website: “Barcelona are a great side. No more needs to be said about Messi, but Barca always give you difficulties, whatever starting XI they field or the changes they make.

📺 Celades: "We will go out against Barça with the best mentality"— Valencia CF English 🦇💯 (@valenciacf_en) September 13, 2019

“They cause even more problems at their home ground. We know how difficult the game will be, but we are focused on the plan that we have worked on in our two training sessions together. We’ll see if we are capable of competing in the best way possible.

“We will go out there tomorrow in Barcelona with the best mentality, and try to compete against a magnificent side.”