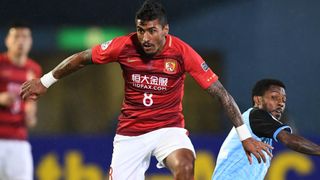 Andre Villas-Boas believes Paulinho's prospective move to Barcelona from Guangzhou Evergrande Taobao is a fillip for the Chinese Super League.

Guangzhou head coach Luiz Felipe Scolari and captain Zheng Zhi confirmed on Sunday that the 29-year-old Brazil international was set to move to Camp Nou, with Barca belatedly agreeing to pay a release clause thought to be in the region of €40million.

The CSL and a number of its high profile recruits have been criticised over the past year amid accusations players leaving Europe's major leagues are doing so purely for financial gain and turning their backs on superior standards of football.

But Villas-Boas, who managed Paulinho during the midfielder's time at Tottenham, suggested such claims must be wide of the mark if a club of Barca's standing are looking towards the CSL in order to improve their squad.

"Paulinho’s departure is a loss for Guangzhou Evergrande but a gain for Chinese football," said the Portuguese coach after his Shanghai SIPG beat Chongqing Lifan 3-2.

"The fact that Paulinho has transferred to one of the best clubs in the world means that those big clubs are paying close attention to the CSL."

Barcelona host rivals Real Madrid in the first leg of the Supercopa de Espana on Sunday and, after Wednesday's return clash, Ernesto Valverde's side open their LaLiga campaign at home to Real Betis next weekend.