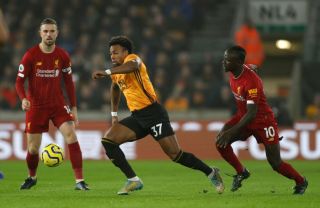 Everyone knew that Adama Traore had the potential to be something truly special, but they often wondered if, and when, he would make that step from exciting prodigy to elite performer.

This season he has been a revelation. Under the guidance of Nuno Espirito Santo, the winger has used his rapid pace and unique dribbling ability to deliver consistently productive performances.

In 24 Premier League appearances, Traore has scored four goals, registered seven assists and embarrassed countless full-backs. More than 20 players have already been booked for fouling him.

Just six points off the top four, and through to the last 32 of the Europa League, Wolverhampton Wanderers are enjoying an excellent season after a difficult start.

Traore’s incredible impact has been a key factor in their success, with the winger breezing past opposition defenders and putting in a constant supply of quality crosses.

Once such an erratic player, his newfound consistency resulted in a first call-up to the Spain squad and now Barcelona are believed to be closely monitoring his progress.

Traore came through the club’s famous youth system, going on to make four first-team appearances before leaving to join Aston Villa in the summer of 2015.

At 24 he still has considerable scope to get even better and, according to the Daily Mail, Barcelona are one of several clubs preparing to bid for him.

Barca are currently undergoing something of a transition and see the explosive Traore as someone who could help reinvigorate their squad.

He’s a player quite unlike anyone else in world football, with a frightening combination of speed, strength and direct dribbling. At his best, he’s almost unstoppable.

Wolves will undoubtedly be keen to hold onto Traore but the appeal of returning to his first club and competing for trophies alongside Lionel Messi and others is obvious.