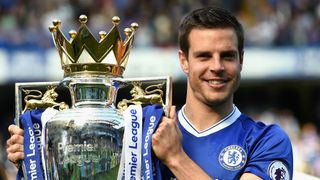 Chelsea defender Cesar Azpilicueta is not thinking about leaving the club, although he accepts it is "a compliment" to have been linked with Barcelona.

The Spain international played every minute of the season in Chelsea's Premier League title triumph and has been touted as a potential solution to Barcelona's ongoing selection issues at right-back.

Azpilicueta committed his future to Chelsea until 2020 by signing a new three-and-a-half-year deal in December and the 27-year-old insists he is happy to stay at Stamford Bridge despite reports Barcelona want to buy him.

"It's flattering that a club like Barcelona can be interested in you," Azpilicueta told Marca. "Last year, after a bad season on a collective level, we did not have those types of rumours.

"However, this season we have been crowned champions and this type of story indicates that we have done well.

"Interest from teams of this level is very positive but I am very happy here. I feel very valued by the club and I do not think of anything else."

. played every minute of every match during our Premier League title-winning campaign! May 23, 2017

Azpilicueta thanked Chelsea manager Antonio Conte for having faith in his ability and the defender is now targeting completing the double in Saturday's FA Cup final against Arsenal at Wembley.

"Obviously it's not easy to play every minute and win the league," Azpilicueta told the Chelsea website. "It's a big achievement. I've tried to do my best to get in the team but I have to be thankful to the manager, he's trusted me a lot.

Champions!! So proud of this team and to achieve the whole 3.420 minutes in the League! Thanks and let's go for the DOUBLE on Saturday! May 21, 2017

"I was always in the team and the only way I could repay his confidence was by working hard, which is what I've tried to do since pre-season. In the end we got a big reward but we want a bigger one next Saturday.

"The manager controls everything and he asked me how I was before Watford, after a Friday night game and the big celebrations. When I finished that game I was celebrating but in the back of my mind I didn't want to let it go because I was 180 minutes away from a big achievement, so I did my best to recover."