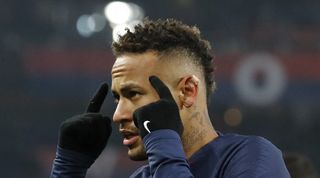 Neymar's prospective exit from Paris Saint-Germain became a saga, after the Brazilian expressed his desire to return to Barcelona – the club he left for Paris in a world-record deal two years ago.

PSG executives doubled down on their star, citing a lack of commitment - and when Real Madrid joined the race, it looked increasingly likely that an exit was on the cards.

However, no deal was struck and Neymar remains in Paris.

Messi admits that he offered his opinion on the player's return, but says he demanded nothing.

"A lot of things are said. [We] didn't ask for his signing," the Argentine revealed to Sport (via BBC Sport). "Obviously we commented on it when we heard Ney might come, we gave our opinions on whether it was good or not.

"I would have loved Neymar to come.

"I understand the people who were against it. It's normal after everything that happened with Ney, because of how he went and how he left us.

"It's normal and logical that there are many people who don't want him to come back, but thinking in sporting terms, for me Neymar is one of the best in the world.

"Obviously in our team, he would have increased the chance of achieving the results we want so much."

Quiz! Can you name every country Cristiano Ronaldo has scored against?