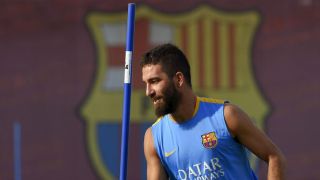 Barcelona are to assess the severity of an ankle injury sustained by Arda Turan in training on Friday.

Turkey international Turan, who joined from La Liga rivals Atletico Madrid earlier this month, twisted his ankle and an initial diagnosis from Barca stated that he has sprained ligaments.

A Barca statement read: "Arda Turan twisted his ankle during Friday morning training and the verdict is that he has a second degree sprain in the external ligaments.

"He will now need to be subjected to more thorough testing, which should shed more light on his availability over the next few days."

The midfielder is unable to make his debut for Luis Enrique's side until January due to a FIFA ban preventing the Liga champions from registering new players in 2015.