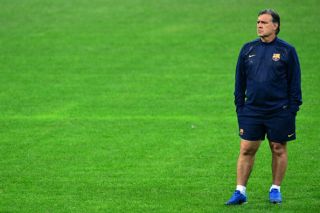 The Catalan club have met Milan on six occasions in the UEFA Champions League over the past two seasons with Barcelona twice failing to win in Italy.

In last season's Round of 16, Milan won the first leg at home 2-0 before Barcelona responded at the Nou Camp with a 4-0 triumph to advance to the quarter-finals.

Martino has reminded his players they cannot take Milan lightly, despite the fact the Italian club sit eighth in Serie A with just three wins from eight league matches.

"They (Milan) are far too good a team for us to underestimate them and take a win for granted," Martino said on Monday.

"Milan are a team that for sure will enter into pitch trying to give the best account of themselves and take pride in wearing the shirt.

"In no way are we taking this game as a formality. It is a very difficult game."

Barcelona will enter Tuesday's game at the San Siro on the back of a scoreless draw away to Osasuna.

But with Atletico Madrid losing away to Espanyol, the draw was enough for Barcelona to reclaim top spot in La Liga and Martino is confident his team is ready to take on Milan.

"We come into this game on the back of a good performance but a poor result," the Argentine coach said.

"Despite that the draw gave us top spot in La Liga.

"We are very good and confident with our work so far and we will try to continue it with a good performance and score tomorrow."