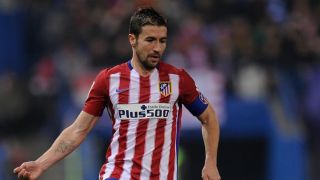 Atletico Madrid captain Gabi insists his team-mates have no time to feel sorry for themselves after crashing out of the Copa del Rey as they prepare to play champions Barcelona in a crucial La Liga clash at Camp Nou.

Wednesday's 3-2 second-leg defeat at home to Celta Vigo saw Diego Simeone's men crash out at the quarter-final stage for the second straight season three days after a frustrating 0-0 league draw at home to Sevilla.

With Real Madrid already expelled, Saturday's opponents Barcelona are left as overwhelming favourites to win the competition after they battled past Athletic Bilbao with a 3-1 second-leg win and 5-2 aggregate triumph, although a tense tie was still level going into the second half.

Both sides, who between them have won six of the last seven La Liga crowns, must swiftly turn their attention to a vital contest in a match that could be decisive in the title race.

Barca and Atletico are level on points at the top of the table, although Luis Enrique's men hold a key game in hand and Gabi knows his team simply have to be ready.

He said: "The team is hurting. When you don't win in a competition that we like, when the fans come to cheer and have contributed so much, the dressing room is disappointed.

"But the important thing for the group is to get back up and we have a big match against a great rival on Saturday."

Team-mate Juanfran agreed and hopes Atleti can produce a win as underdogs in the same way Celta succeeded against them.

"The best way to heal this wound is to win this Saturday," said the defender. "We have to play a better match - that is a given.

"Just as everyone thought we were the favourites at home, everyone will think Barcelona are favourites, so maybe the same thing happens but in our favour."

Luis Enrique, meanwhile, is unconcerned by Barca having to leave it late to progress to the last four of the Copa after a similarly close game in the 2-1 win over Malaga in their last league contest.

The Barca head coach said: "We are going to have difficult games and at the moment we are having halves of games that are not the best.

"But you can't always be at the very best.  In the second half we were much the better side and in the first half Athletic were the better side. If it had been like that during the whole game then I could say it was a problem, but no."

Barca have beaten Atletico in five consecutive matches since Simeone's side famously won the league with a draw at Camp Nou in May 2014.

The hosts will check on Arda Turan (fever) and Jordi Alba (hamstring) after they missed the clash with Athletic, while Neymar (ankle) will also be assessed. Atletico have recently been without Fernando Torres (ankle).

- Barcelona have gone 11 league games in a row without defeat against Atletico (W9 D2).
- Barcelona have not lost any of their last nine home league games against Atletico (W7 D2), scoring an average of 3.44 goals per game.
- Barca have gone without defeat in their previous 18 home league games (W16 D2), featuring an average of 3.44 goals scored and 0.61 conceded per game.
- Atletico have won their last three league games away from home without conceding, and have not kept four or more clean sheets in a row away from home since 2013 (6).
- Lionel Messi is currently on his best scoring streak in La Liga this season, having found the back of the net in all three of his previous league games (five goals).
- Should he feature at Camp Nou, the fixture will represent Juanfran's 350th appearance in La Liga.