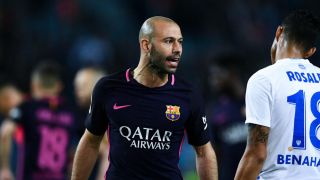 Javier Mascherano is a doubt for Barcelona's final game of the season after suffering a minor hamstring injury.

Barca host Eibar on Sunday and will still have hopes of retaining their La Liga title at the expense of bitter rivals Real Madrid.

They might do so with a depleted defence after Mascherano withdrew during the warm-up ahead of the 4-1 win at Las Palmas last time out.

Barcelona have confirmed the Argentina international sustained "a small lesion in the biceps femoris of the right leg" and his condition will be monitored this week.

In Mascherano's absence and with Gerard Pique ruled out due to injury, Brazilian youngster Marlon Santos was thrust into the starting line-up for his LaLiga debut alongside Samuel Umtiti at centre-back.

Left-back Lucas Digne started on the right hand side of defence but was forced to withdraw from the action, with midfielder Andre Gomes coming on at full-back as a Neymar hat-trick inspired Barca to victory.

Luis Enrique's side are above Madrid by virtue of a superior head-to-head record but the capital club play a potentially decisive game in hand at Celta Vigo on Wednesday, before closing their campaign at Malaga.