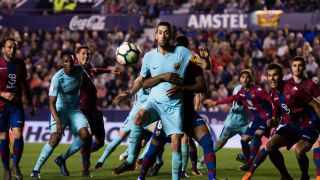 Barcelona head coach Ernesto Valverde struggled to hide his anger after Levante ended the champions' quest for an unbeaten LaLiga season on the penultimate weekend.

Valverde opted to rest Lionel Messi and Barca certainly needed their talisman's mercurial qualities when they found themselves 5-1 down after 56 minutes due to a hat-trick from Emmanuel Boateng and Enis Bardhi's brilliant brace.

Philippe Coutinho took centre stage with a treble of his own as the Blaugrana made a decent fist of the comeback and Luis Suarez made it 5-4 from the penalty spot with 19 minutes to play.

Suarez missed a chance to level as the clock ticked down and next weekend's title celebration at home to Real Sociedad will now be a slightly less joyous occasion.

"I'm very angry not to finish unbeaten but there's nothing I can do about it," Valverde told beIN Sport. "We have to look forward.

"It was an amazing game with great effectiveness from our rival. We had a good reaction, we went forward, reduced the deficit and were close to a draw several times.

"The match has been determined by a crazy 10 minutes at the start of the second half."

The defeat against Levante means the unbeaten run in ends at 43 games.This team's record has gone down in history.Thanks for your efforts!  May 13, 2018

Valverde was also keen to praise Levante's relentless approach and defended Yerry Mina – the Colombia centre-back, who endured a torrid time on his third LaLiga start.

"Levante are the best team in the league right now for intensity and effectiveness," he said.

"We saw it in their last game against Leganes [a 3-0 away win]. They also played very freely because they did not have tension and we have to recognise what they have done."

On January arrival Mina, Valverde added: "You see the result and you think the defence has had a horrible day. Yerry had personality at certain moments of the game, the same as the others."