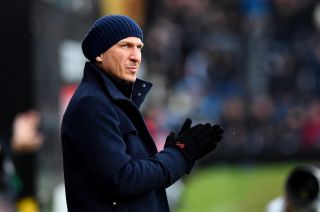 Manager Gerhard Struber acknowledged “a big victory” after his side moved to within three points of safety with a 1-0 win at Hull.

Struber’s men have now won three Sky Bet Championship games on the spin and have suddenly emerged valid candidates to beat the drop.

Barnsley boss Struber said: “The last few performances have given every single player a good feeling.

“Some teams maybe don’t think they are in the relegation (fight), but it’s very close for many teams right now.

“For us, it’s not new to play with this pressure, but for other teams maybe it is. This was a very important victory when we see the table and see all the teams at the bottom picking up points.

Barnsley were impressive from the outset at the KCOM Stadium and fully deserved three points.

Woodrow capitalised upon George Long’s awful mistake after 42 minutes to notch the only goal of the game.

Hull had a few half-chances thereafter, but the visitors defended sensibly and easily saw out the remainder of the game.

Struber said: “In the first half we had very good positions and had good control on the ball. We had very high aggression and it’s not easy to play against.

“The goal was a good feeling for us. It was a hit in the face for the opponent, just before half-time. I think it’s a very crazy league. It’s so tough, but it’s a big challenge for my team and me.

“It’s a good moment right now, but for the next few weeks we have to work in the same style and with the same conviction that we can stay in the league.”

Whereas Barnsley are seemingly on the march, Hull are in a worrying run of form.

Grant McCann’s men have not won in nine league games and are now four points outside the relegation zone.

To make things worse for the Tigers, McCann confirmed that striker Tom Eaves will be out for the rest of the season with ankle ligament damage he sustained in the 2-1 defeat at Preston on Saturday.

McCann said: “We got what we deserved. Barnsley were the better team and won fair and square – we didn’t perform.

“We’ve not got two options: we either go under or we roll our sleeves up. We’ve got to try and find that win that will kickstart our season – the sooner the better.

“We have to pick them (the players) up and go again. We are not stupid, we know the position we’re in.

“It’s probably the longest run as a player or a manager I’ve gone without winning.

“There’s going to be a lot of negativity. We’re not making any excuses, but what we’ve got to now is knuckle down.

“What we need is bravery. When things are going against you it’s very easy to hide. It takes brave people, brave men and brave teams to get out of things like this.

“It’s a tough time. But one thing I know about tough times is to stick together and stay strong.

“But if we perform like this on Saturday (at home to Leeds) we’ll get hammered.”