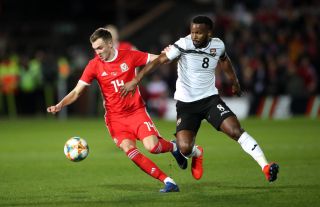 Wales international Hedges, 23, was out of contract with newly-promoted Barnsley, who had offered him a new deal.

“Barnsley Football Club can confirm that Ryan Hedges has decided against signing a new contract with the club and has decided to sign for Scottish Premier League [sic] side Aberdeen FC,” read a statement on Barnsley’s official website.

Aberdeen confirmed on their official website that Hedges had agreed a pre-contract and would officially join the club on a three-year deal on July 1.

“He said if this move ever came about I should take it with both hands – and I’m here.”

Hedges joined Barnsley from Swansea in January 2017 and scored three goals in 59 appearances in all competitions.

Barnsley were promoted back to the Sky Bet Championship at the first attempt under German manager Daniel Stendel after finishing second in League One.