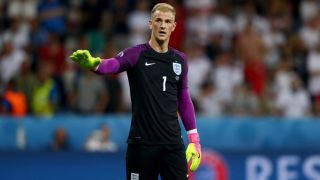 Fabien Barthez might not have been the most conventional goalkeeper in his playing days, but the former Manchester United man said England has no idea when it comes to goalkeeping.

Barthez criticised England keeper Joe Hart's performances at Euro 2016, claiming he is "two levels" behind France's Hugo Lloris and Germany's Manuel Neuer, who both remain in the tournament.

Hart was criticised for a number of his display at the European Championship, including during England's shock 2-1 loss to Iceland in the round of 16 where he was seen as culpable in the goal that eventually knocked his side out of the tournament.

"His diving technique isn't good. It's too horizontal and not aggressive enough," Barthez told France Football.

"He messes up because he doesn’t attack the ball’s path, meaning his hands are then pushed back by the impact with the ball. Hart is two levels below Neuer, [Thibaut] Courtois and Lloris."

And the Frenchman went further to say that Hart is a shining example of how England continues to get it wrong when it comes to keepers.

"He isn't flexible and doesn't come out. When he runs, it's just 'thud, thud, thud'," he explained.

"It's heavy. I don’t understand the English culture around the position. They need huge guys, but they're just walls that don't come out.

"Clubs and the FA need to change their philosophy in developing goalkeepers."