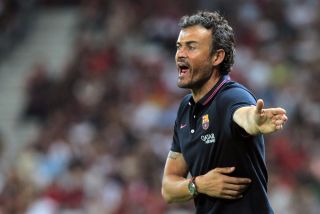 The Catalan giants have gone through something of a transitional phase in the past few months, with the arrival of Luis Suarez from Liverpool in a reported £75 million deal proving their headline activity in the transfer market thus far.

Barca have also bolstered their squad with the likes of Ivan Rakitic, Thomas Vermaelen and Jeremy Mathieu ahead of the new Liga campaign.

However, Bartomeu believes that bringing in Enrique - chosen to replace former boss Gerardo Martino in May - has been Barca's best piece of business.

"Luis Enrique has been our most important signing of the season," he said in a speech at Barcelona's 35th Supporters Club Congress.

"He was the first signing of this 'promised revolution' we were going to issue this summer.

"We already knew him as a player and also as the reserve-team manager. Luis Enrique provides us with passion, leadership and also hard-working sacrifices."

Bartomeu also reaffirmed his delight at the purchase of Suarez and revealed that the Uruguay international has wanted to move to Camp Nou for some time.

"We made an effort because we want to have a competitive team," he added. "Luis Suarez is so excited to be here. He was wanted to play for Barca for many years."

Barca are aiming to bounce back from a disappointing 2013-14 campaign that failed to yield success in La Liga, the Copa del Rey and UEFA Champions League.