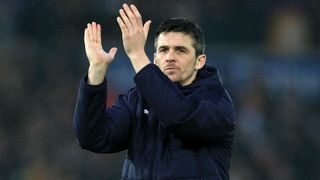 Joey Barton will begin his managerial career at Fleetwood Town after signing a three-year deal to become the League One club's head coach.

The former Burnley, Newcastle United and Manchester City midfielder takes charge from June 2, the day after his suspension for breaching betting regulations comes to an end.

Barton was handed an 18-month ban from all football activity in April 2017 by the Football Association after placing more than 1,000 bets over a 10-year period, though it was later cut to 13 months on appeal.

The 35-year-old will replace John Sheridan, who has steered Fleetwood out of the relegation zone since taking charge on a short-term deal in February.

"I'm very excited by the challenge and the project at Fleetwood Town," Barton said in a statement released by the club.

"It's a club I've known for a long time, and a chairman I already have a very good relationship with.

"My first job in management was always going to be a big decision for me and I'm delighted with the opportunity ahead, I'm joining a club with big ambitions. I'm looking forward to getting started on June 2."

| Fleetwood Town can confirm an agreement has been reached for to become the club's new Head Coach as of June 2nd.Full details: April 18, 2018

Barton's impending arrival at Highbury Stadium is a major coup for the third-tier club, according to chairman Andy Pilley.

"Joey not only brings a host of experience and profile, but I also feel he has the potential to become one of the best in the new generation of coaches," he said.

"He's someone I've known for a number of years and I'm convinced he's ready to make the step into management, and that he will be a huge success."