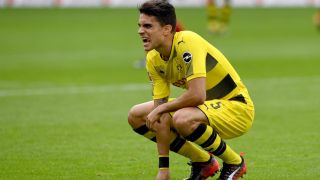 Borussia Dortmund will be without Marc Bartra for the Champions League match against Tottenham at Wembley.

Defender Bartra has not travelled to London for Wednesday's Group H opener at Wembley.

The 26-year-old had been substituted in the first half of Saturday's 0-0 Bundesliga draw at Freiburg due to an adductor injury and has not recovered in time to play.

Confirmation of his absence comes after Dortmund captain Marcel Schmelzer was ruled out for six weeks with an ankle injury suffered in the same game.

Bartra, formerly of Barcelona, has started all three of Dortmund's league matches this season, helping them to the top of the table.

Fellow defender Neven Subotic (illness) was the other player not to make the journey to London.