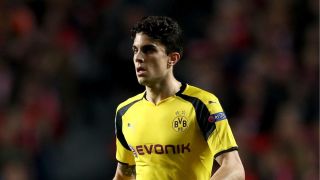 Marc Bartra has resumed full training a month after suffering a wrist injury in the bomb attack on Borussia Dortmund's team bus on April 11.

The Spain international was the only player to sustain significant injuries in the blast - which occurred just prior to the Champions League quarter-final first leg with Monaco - as he suffered a fractured right wrist and required surgery to repair the damage.

Bartra had already posted a video on Twitter on Sunday showing him taking part in a rigorous workout in the sand and he has now taken another step toward his comeback by joining his team-mates on the training pitch on Wednesday.

The 26-year-old's return to regular training is a boost for Dortmund ahead of the final games of the 2016-17 campaign, with BVB still fighting for a top-three finish to secure direct qualification for the Champions League and the DFB Pokal final against Eintracht Frankfurt on the horizon later this month.

The former Barcelona centre-back has made 29 appearances in all competitions this term, scoring once in the process.