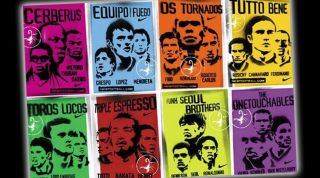 The rise of catch-up TV means watching adverts is actually quite rare these days. The ones you do have to sit through are a chore, and when online you're only furiously watching the first five seconds before it'll let you skip anything.

But it didn't always used to be this way; far from it. Football – Nike in particular – have led the way when it comes to TV advertising, to the point where we genuinely look forward to watching their latest goggle-box offerings. It's been this way for over two decades now, as our list below will helpfully remind you.

So sit back, relax, and don't blame us if you're immediately foot-tapping to Mas Que Nada...

Ronaldinho was the best player in the world when this was put together. Yes, the video was fake - some parts were edited with computer generated images - but did anyone care? Absolutely not. The ad went viral and became the first video on YouTube to reach one million views. Lovely boots, Ron.

FEATURE How YouTube changed football: the seismic shift of a global phenomenon

Every other Joga Bonito advert

We could have picked any one of these beautiful creations, but to save your time and ours we’ve grouped them together. So you’re welcome (or we’re incredibly sorry).

Produced by Nike back in the mid-noughties, ‘Joga Bonito’ - which translates to “play beautiful” in Portuguese - was a series of short videos created to combat cynicism in the game, and to promote skill and elegance. Presented and narrated by the effortlessly cool Eric Cantona, the clips were awash with skill, flair and general brilliance from some of the game's greatest; mostly Brazilians. It was a glimpse behind the curtain, a reconnection with your idols which in turn led to a resurgence in street football and futsal across England and beyond. “When you were a kid it was easy. You are not afraid to try... to dare. You do it, just because you like it.” And bloody hell, did we like it.

The 2006 World Cup isn’t one that lives fondly in the memory of most football fans, but this advert from Adidas certainly does. All the big names are here: Zidane, Kahn, Raul, Lampard, Beckham, Kaka... Defoe! There’s even room on both teams for computer-generated versions of Beckenbauer and Platini. The real life version of FIFA Ultimate Team with two young kids pulling the strings. Why aren’t adverts good anymore?

Some top-drawer performances in this masterpiece. Our favourite? Wayne Rooney in a dystopian world where he’s a... groundskeeper? Living in a caravan, all because he underhit a pass to Theo Walcott, before redeeming himself and being knighted; if only, Wayne. Ronaldinho twisting and turning players and inspiring millions; less dystopian. And to top it off there’s even Homer Simpson getting nutmegged by Ronaldo. Iconic.​

This had every kid up and down the country bombing round their house with a Total 90 ball glued to their feet. Pissing off every single member of their family, one at a time, as they twisted and twined down the hallway like a drunk toddler before miscontrolling and slapping a shot straight into a fancy vase. Simpler times. Happier times. Boo!

Oh Pepsi, where did it all go wrong?

In this classic, we find ourselves in an old western scene. A mob of Manchester United’s finest stroll into an old saloon and who happens to be there? Only the bleedin’ Galacticos. Becks heads to the bar to order a drink and breaks the illusion of the ad with a slightly jarring “Pepsi” to the barman, before Iker Casillas steps in and drinks it all to himself. The two step outside to resolve this disagreement in the only way footballers know how: a penalty.

In a wild twist of events, a horse ends up scoring the penalty and there’s even time for a Rivaldo/Roberto Carlos camio. The only thing missing? Conflict-resolution queen Kendall Jenner. She would have been about 10 when the advert was filmed, but still: it would’ve been nice for her to show up.

At school, every kid had a favourite player. One they wished they could be. Your Kakas and Ronaldos, all the way through to your Shaun Goaters and Eric Djemba-Djembas. There was no discrimination on the school football field, everyone was welcome. This advert takes inspiration from that - each kid calling out the player they wish they could be. Even the Hulk makes an appearance, which must have been a logistical nightmare.

Nike 'Take It To The Next Level'

A masterpiece. It plays out through the eyes of a young star who's starting his career in non-league. With seconds left our man curls in a beauty of a free-kick, and who's that on the sidelines watching? Only Arsene Wenger, who has seen all he needs to and signs him there and then – just like in real football, right?

The next few minutes are a rollercoaster of emotions. Bullied, bruised and battered, we're shown the commitment and amount of sick you have to get through to become a professional footballer. The advert crescendos with a game between Holland and Portugal, with our star turning out for the former. With seconds left, a free-kick - just like the one from the first scene, remember? - is won, and we're standing over it. Cut to black and some loud Eagles of Death Metal, who seem to have had a monopoloy on Nike advert soundtracks in the 2000s. We're certainly not complaning.

Poor Ronaldo. Look at him. So bored in the airport, just like one of us. His flight presumably delayed by drones or drunk knobheads on their way to Prague. So he pulls out his favourite ball, flicks it up in the air and chaos erupts. Before you know it, the Brazilian lads are on the tarmac knocking it around Boeing 737s.

The health and safety officer on set is presumably chasing the boys just out of shot and having a mild heart-attack as Rivaldo flicks the ball over an actual* helicopter, jumps through the cockpit and pings one back to Ronaldo who, after some silky footwork, is through on goal (two railings). You’d bet your house on him scoring but he hits the post. Agony for Ronaldo; perhaps an omen of what was to come in 1998.

READ THIS Inside the greatest ad EVER: Nike's brilliant 1998 Brazil airport commercial – by those who made it

Of course Eric Cantona runs a cage football match on a merchant ship in the middle of the ocean. Where else would it be? Perhaps his famous line about seagulls following trawlers was all just a secret, coded invite to this tournament. We don’t know for sure.

What we do know is that after this ad went live, ‘the cage’ became everything. Pop-up pitches arrived around the world in 2002 and a couple of years later we were treated to one of the best FIFA’s of all time: FIFA Street. Thanks, EA. Thanks, Nike. Thanks, Eric.

In a World Cup advert, a few things are absolutely vital: top players, decent actors, beautiful settings, impressive visuals and a banging soundtrack. Get all of that right and you’ll have yourself a pretty tasty spectacle, much like this one.

The latest serving from Nike features a young mascot who gets inadvertently dragged from match to dressing room, photoshoot to pitchside, all with some of the biggest names in the women’s game. She finally arrives back on the pitch with Australia icon Sam Kerr, who wins a free-kick and hands it over to our young heroine to stick in the mixer. You can guess the rest. “Don’t change your dream. Change the world,” it declares. Too right.

Before this advert even kicks off you see the circular numbers on the front of the kits and know it’s about to go down.

Luis Figo mugs off Original Ronaldo in the first 10 seconds and Roberto Carlos is having none of it. He puts in a big challenge on the Portuguese - a real bone-shaker - and all hell breaks loose. Before Big Phil Scorlari can do anything the players are off back down the tunnel, Papa Loves Mambo starts blaring out of nowhere and the teams are trashing the place.

A twinkly young Cristiano makes a brief appearance, but (for once) this wasn’t about him – he’s merely a spectator at this point. It’s all about Figo and Ronaldinho. As the two icons bundle out onto the pitch, the Brazilian emerges with the ball. He pulls out his trademark elastico bamboozling Portuguese players left, right and centre, before being clattered by the referee who, quite frankly, has had enough of all these silly shenanigans.

These days this wouldn’t even make it past the first round of Ofcom checks, but in the 90s anything went. We find our heroes at what looks like a colosseum in the desert, and as the sun sets, evil arises – which here amounts to men with paint on their faces and bondage masks. Paolo Maldini delivers an Oscar-worthy, “Maybe they’re friendly?” before the team from the depths of hell kick 50 shades of crap out of our beloved stars.

Figo almost gets stamped to death, Patrick Kluivert gets booted in the chest and Ian Wright gets full on nutted. It’s not going well for the all-star team, but one tackle changes their fortunes: that man Maldini. He knocks it to boy wonder Ronaldo, who mugs off a handful of hell’s finest before playing it to Nike advert king, Eric Cantona. The Frenchman flicks his trademark collar up and quips “au revoir” before smashing the ball through the stomach of the devil - who explodes, obviously - into the goal and wins the game.

As the sun rises, evil disappears and we’re left with a confused Wrighty who, like all of us, is wondering if that actually happened.

And now we arrive at the antithesis of everything that came before. When the big brands started doing their sexy, slick football adverts, John Smith’s did this.

Peter Kay on a pitch next to Wormwood Scrubs, having a game of SH*T with his mates before lumping the ball over 16 garden fences and loudly exclaiming ‘AVE IT!’. Rumour has it that this was improvised by Kay on the day, and he just said whatever came to his head when he connected with the ball. Playgrounds were never the same again.