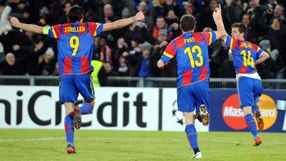 The episode was the latest twist in the long-running saga centered on Sion which nearly resulted in Switzerland receiving an international ban.

Basel won 3-0 at Sion on Sunday to take an unassailable 16-point lead over second-placed FC Luzern, who have five matches to play, at the top of the Swiss Super League.

However, Basel had stated before the match that, as Luzern could still win a further two points from a protest they have taken to a sporting tribunal, they would not recognise themselves as champions at this point.

Basel currently have 62 points and Lucerne 46.

"Basel will only celebrate our 15th title if Luzern cannot catch up by winning their remaining five games plus two possible points from the tribunal," said Basel in a statement before the game.

"That means that the title cannot be guaranteed with absolute certainty with a win... on Sunday. Correspondingly, there will be no celebration."

Sion were deducted 36 points by the Swiss league for fielding ineligible players who they had signed while being subject to a transfer ban.

However, FC Luzern then claimed that they should have been awarded a walkover win from a match in September when they drew 1-1 with Sion, who fielded some of the players ruled ineligible.

This would give them a further two points.

Basel said the case is now with the Court of Arbitration for Sport (CAS) which is expected to make a ruling by mid-May.

"We want to be champions on the pitch independent of what the tribunals decide," said Basel coach Heiko Vogel.

Sion's case took on international dimensions when they fielded some of the players in a Europe League qualifying match and were thrown out of the competition.

The club then defied UEFA and FIFA statutes by taking their case to the Swiss civil courts, prompting the threat of an international ban for the country's football federation.