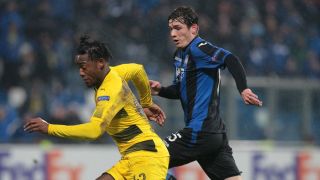 Marcel Schmelzer's late goal secured a 4-3 aggregate win for Dortmund as the Bundesliga side booked their place in the last 16, but the aftermath has been overshadowed by the Chelsea loanee's claims.

Batshuayi tweeted: "2018 and still racists monkey noises in the stands…really?! Hope you have fun watching the rest of the Europa League on TV while we are through. #SayNoToRacism #GoWatchBlackPanther"

Atalanta president Antonio Percassi was told about the tweet during a live interview with Sky Sport Italia.

He said: "I'll be honest, I didn't hear them. If they did happen, then I am very sad and absolutely apologise to Batshuayi. This should never happen."

Atalanta were fined £32,000 in 2014 after bananas were thrown at AC Milan players during a Serie A game.