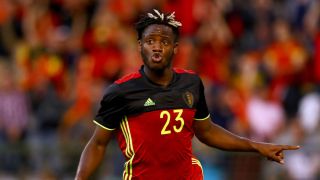 Michy Batshuayi wants regular first-team football in 2017-18 to give him a chance of reaching the 2018 World Cup but insists he will not force a move away from Chelsea.

The striker moved to Stamford Bridge from Marseille in July for a deal in excess of £30million after impressing in Ligue 1 with 17 league goals in the 2015-16 season.

Diego Costa's return to form for Chelsea meant Batshuayi's chances were limited this term, though, and he only started once in the Premier League all season.

That start came in the penultimate game of the campaign as Chelsea lifted the league title, Batshuayi having secured the championship for Antonio Conte's men three days earlier with the decisive goal against West Brom.

With chances few and far between under Conte, Batshuayi – who has been linked with a return to Marseille, or a swap to London rivals West Ham – insists he will not be happy with another season on the substitute's bench.

"There's a World Cup coming up next year. I want to be ready for the World Cup.

"I'm not going to ask anything. I'm going to listen to what they [Chelsea] are saying.

"They are the boss, not me. And afterwards I'll discuss it with my agent and the club. Amicably, as friends of course.

He added: "I have lived difficult moments, but it's in times like those that you learn the most. Certainly when you're surrounded by top-class players, like Cesc Fabregas, Eden Hazard, all of them, you only can make progress in a situation like that.

"I haven't played a lot, but I managed to score one of the most important goals. It gave me a boost. Good for me, good for the team.