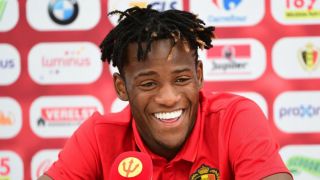 Michy Batshuayi is keen to emulate Didier Drogba at Chelsea and enjoy an equally successful career at Stamford Bridge as the Ivorian.

The 22-year-old signed a five-year deal with Chelsea on Sunday to complete his transfer from Marseille, following in the footsteps of Drogba - who made the same move in 2004.

Batshuayi has been likened to the 38-year-old on more than one occasion and he is hopeful he can make the same impact at the Premier League giants.

Drogba won four Premier League titles as well as one Champions League during his two spells with Chelsea.

"Drogba and I are different people," Batshuayi told the official Chelsea website.

"But I totally respect the career Didier had at Chelsea and I am going to do my best [to enjoy similar success].

"I want to enjoy myself and give my maximum to help the team win matches."

The striker has regularly been compared to Drogba, but he tries to model his game on former great Ronaldo instead.

"The Brazilian Ronaldo was my idol when I grew up," Batshuayi continued.

"He was a phenomenal player."

Batshuayi will be working under Antonio Conte at Chelsea and he is keen to team up with the former Italy coach.

"It's a real chance for me and I'm looking forward to starting with a new club and new coach," he added.

"It's a great opportunity."