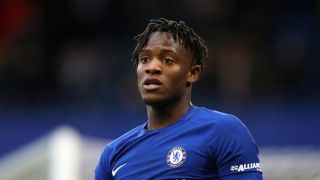 Michy Batshuayi does not know if he will still be at Chelsea when the transfer window closes on Wednesday.

The Belgian has been strongly linked with a loan move as the Premier League champions are thought to want to buy a striker to support Alvaro Morata.

With Morata absent, Batshuayi struck a first-half brace to take his tally for the season to 10 in all competitions as Chelsea downed Newcastle United 3-0 in the FA Cup on Sunday.

But the 24-year-old is unsure whether his double will be enough to keep him in manager Antonio Conte's plans for the rest of the season.

"I don't know," Batshuayi told BT Sport when asked about his future. "It's up to the boss, it's better to talk to Conte."

NEW HAIR DONT CARE Clean sheet, 2 goals and through next round today was a good day January 28, 2018

Chelsea rarely needed to get out of second gear, with Marcos Alonso's free-kick wrapping up the scoring at Stamford Bridge.

"It's very good for the team and for me I'm very happy," said Batshuayi.

"When I have a chance I take the chance and I work every day – I'm very happy."

Good to be back on winning ways! Congratulations to and for their goals! January 28, 2018

"It was decent in the end," Cahill told BT Sport. "I thought we started a bit rusty. We needed that win and to progress is the most important.

"We need to try to reach the final rounds in this having gone out of the EFL Cup the other night so this is very important.

"After the first 10-15 minutes we got on with it. Especially this guy [Batshuayi], he took his opportunity."