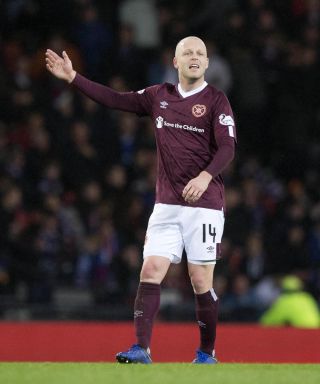 Steven Naismith admits Hearts have to adapt to the changing ways of boss Daniel Stendel while battling to get away from the foot of the Ladbrokes Premiership.

Stendel has changed personnel and style since taking over from Craig Levein in December, and while the Jambos have made it into the quarter-finals of the William Hill Scottish Cup – where they will host Rangers – they also sit bottom of the table.

Ahead of Wednesday night’s trip to league leaders Celtic, the Hearts skipper admitted that, while the adaptation takes place, the games are becoming bigger and bigger.

“It does because of where we are in the table,” he said. “We are in a relegation fight, as simple as that.

“With all the changes that have come and what the manager has brought and wants to do, it is going to take time.

“As much as the pressure is on, I think in the performances we have shown there is a lot of change but we have adapted to it.

“Sometimes we have conceded goals as a team that we don’t want to, that is just part of the change in the way we are playing, but the run of games is what we need.

“Some of the games you look at have been good results, good points, in others we have shot ourselves in the foot.

“But we need to get into a situation where teams are looking up at us rather than the other way around.”

Stendel is hoping victory over Rangers at Tynecastle last month can help belief of an Old Firm double.

However, he accepts his side have to pose an attacking threat if they are to get an unlikely win against the champions.

He said: “Yes, maybe you only lose 1-0 when you defend but you cannot win and we want to win.

“What we need to do is to concentrate for every moment of the game. If you sleep once it can cost you the game.

“We don’t want to give them a chance to play their normal game.”