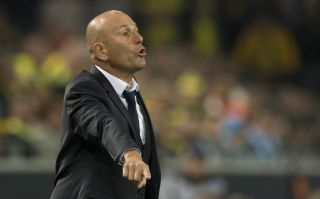 Marseille head into Friday's game with Nice in fourth place in Ligue 1 following a strong start, but suffered losses to Borussia Dortmund in the UEFA Champions League and Paris Saint-Germain domestically before the international break.

The home defeat to PSG was their first to the capital club at the Stade Velodrome since 2008, and Baup has come in for criticism as a result.

Two Ligue 1 managers have already been sacked after poor early-season form, with Sochaux's Eric Hely and Valenciennes' Daniel Sanchez both parting company with their clubs.

The 58-year-old, though, insists he is not burdened by the pressure and was quick to brush off talk of a crisis at the club.

"This is not a crisis at all," he told L'Equipe.

"I have continued to work to prepare for the match to come.

"The pressure is part of my job, three of my colleagues in Ligue 1 have already been removed.

"When you win, everything is swept away. But for me the atmosphere has not changed."