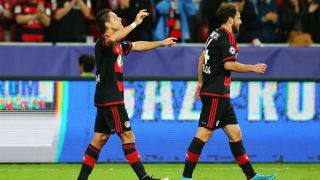 The Mexico forward fired home Leverkusen's third just prior to the hour-mark, though the hosts had been largely frustrated throughout the opening half at the BayArena.

Having a third-minute lead through Admir Mehmedi's precise toe-poke, Leverkusen were pegged back by Nemanja Milunovic's header 10 minutes later.

Though Medmedi did squander a gilt-edged chance for a second, Leverkusen were sluggish in possession and BATE were worthy of being level at the break.

But Leverkusen – playing Belarusian opposition for the first time – reclaimed the lead through Hakan Calhanoglu's fortuitous goal two minutes after the restart, before Hernandez's strike put them in complete control.

Calhanoglu converted from the penalty spot with 15 minutes remaining to put the result beyond all doubt and ensure that Leverkusen got their third consecutive Champions League campaign off to a winning start.

Making his full Leverkusen debut, Hernandez was the instigator as Schmidt's side went ahead, Illya Aleksievich failing to clear from the Mexican's cross and Mehmedi reacting first to prod home into the top-left corner.

However, BATE drew level in the 13th minute when poor marking allowed Milunovic a free header from Igor Stasevich's corner – the Serbian defender's effort deflecting in off Roberto Hilbert.

Mehmedi should have had another shortly before the half-hour mark, but the Switzerland international drilled wide of the right-hand upright after being played in by Karim Bellarabi.

Jonathan Tah was the next to go close for the hosts, but the youngster could only fire high over the crossbar from 10 yards out.

Leverkusen started the second half in a similar vein to how they began the first and were quickly rewarded as Calhanoglu's strike took a wicked deflection off Dzianis Paliakou and looped into the net.

Goalkeeper Sergey Chernik then had to be alert to prevent Hernandez tapping in from Bellarabi's cross.

But Hernandez made amends for the miss in the 58th minute, running onto Kampl's throughball before slotting it between Chernik's legs to nudge Leverkusen further ahead.

And the Bundesliga side wrapped up a comfortable three points when Calhanoglu finished from the spot after Filip Mladenovic had handled in the box.