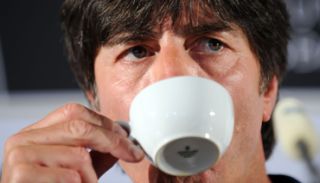 With the German Bundesliga rivals meeting in London's Wembley Stadium on May 25 and Bayern taking on VfB Stuttgart in the German Cup final on June 1, Germany coach Low opted for a mix of youth and experience as well as a handful of newcomers.

The Germans will face Ecuador on May 29 in Boca Raton and the United States in Washington on June 2 in their two friendlies.

"All four have been very convincing throughout the season with their clubs," Low told reporters. "Now they have a chance to present themselves and I look forward to seeing how they deal with it."

Apart from half a dozen Bayern players and Dortmund's Mats Hummels, Ilkay Gundogan and Marcel Schmelzer, the squad also does not include Real Madrid's Mesut Ozil and Sami Khedira.

Two Dortmund players, Sven Bender and Kevin Grosskreutz are set to join the team after the final next week, while top striker Miroslav Klose, back in action for Lazio after a lengthy injury break, will also join them after Italy's cup final on May 26.