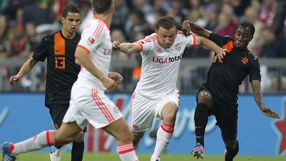 A 33,000 crowd watched the match at the Allianz Arena, where Bayern suffered their penalty shootout defeat against the English Premier League side on Saturday.

Both teams fielded mainly second-string line-ups while goalkeeper Hans-Jorg Butt, defender Breno and forward Ivica Olic all made their final appearances for Bayern.

The match was organised to compensate the Bavarians after their Dutch winger Arjen Robben aggravated an injury playing for the Netherlands at the 2010 World Cup.

Bayern complained angrily at the time that Robben should not have played and he missed several months of the following season.

But the timing of the match could not have turned out worse for Bayern, coming hot on the heels of Saturday's defeat.

Robben, who missed a penalty in extra-time on Saturday, came on as a second-half substitute for the Dutch and some boos were aimed at him from the Bayern fans.