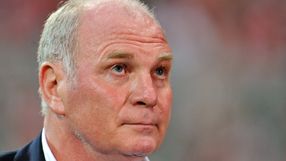 Dortmund need only two points from three games to wrap up their second successive title, but Hoeness said his rivals had no world-class players and that he was not convinced they were operating on limited funds.

"At the moment, what Dortmund have are players who are somewhat hungrier, but they have no world-class players," he said in an interview on Sky Sports Germany.

"For nine months he more or less did not play. In Munich, we would have started talking about a bad purchase a long time ago. In Dortmund, he could develop slowly.

"In Munich, he would have been written off a long time ago, but in that oasis he is still going."

"Two years ago, they were knocked out of the Europe League in humiliating fashion, and this year, they were in an easy Champions League group and they did not even finish third, they were fourth."

He added: "It's always that story, about rich Bayern and poor old Dortmund. Now, they have extended contracts with [Mario] Gotze, [Marco] Reus. Now they will do it with [Robert] Lewandowski, we will wait and see who's next."

Hoeness then described as a "fairytale" suggestions that Dortmund spend 45 million euros on wages in a season.

"They can tell that to somebody who is not involved in business," he said.