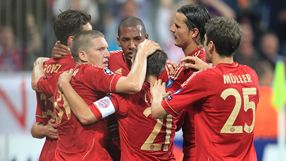 Their 10th successive win in all competitions sent them top of Group A with six points from two games and it was a successful crash test against the team they believe are their main group rivals.

"This was a test of our strength and we kept a clean sheet against a very offensive team," said club CEO Karl-Heinz Rummenigge after a brace from striker Mario Gomez earned a deserved victory.

"We are now five points ahead of City after only two games and six points ahead of Villarreal which means we have created the conditions for the first step towards the round of 16," Rummenigge told reporters.

It may well be so but given their current form it is hard to imagine that Bayern will have a hard time coming through the group that also includes Napoli.

The Bavarians lost their opening Bundesliga game against Borussia Monchengladbach in early August but have not looked back since.

They have won six league games and four Champions League games in a row, including two play-off matches to qualify for the group stage, without conceding a single goal.

Testament to their new-found strength is the fact that central defenders Jerome Boateng and Daniel van Buyten had never been paired up before Tuesday and were only forced to do so after Holger Badstuber was ruled out with a virus just before the game.

"I think it worked pretty well today although it was the first time I played with Daniel in central defence," Boateng said.

Almost anything Bayern try out these days seems to work but Rummenigge warned that talk of reaching the final was far too premature.

"We would be wise to think about things step by step. The title is awarded in May and not September so let's keep the ball low because the Champions League really starts in the knockout phase," he said.