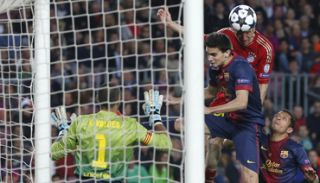 The Bundesliga champions, chasing a fifth continental crown, will play Borussia Dortmund in the May 25 final at London's Wembley Stadium after an imperious performance that inflicted the heaviest two-legged European defeat in Barca's history.

Their bid for a third Champions League crown in five seasons ended in humiliation and the era during which they blazed a trail under Pep Guardiola, who will take over from Jupp Heynckes as Bayern coach next season, was reduced to a distant memory.

Last year's runners-up Bayern had effectively killed off the tie with last week's 4-0 victory in Munich and there was no way back for a toothless Barca when Arjen Robben cut inside and blasted the ball past Victor Valdes in the 49th minute.

A miserable night for the pre-tournament favourites and their fans thronging the giant arena was completed when Gerard Pique skewed the ball into his own net in the 72nd minute and Thomas Muller, who scored twice in the first leg, nodded a third for a rampant Bayern four minutes later.

The Spaniards, last defeated in both legs of a European knockout tie in 1987, were deprived of the talents of Lionel Messi, who has yet to recover fully from a hamstring injury and was left on the bench.

Without the talismanic World Player of the Year they barely threatened as forwards Cesc Fabregas, David Villa and Pedro, and later substitute Alexis Sanchez, were helpless against a resolute Bayern defence.

"We played an outstanding game but there is a difference of Barca with and without Messi," Bayern coach Heynckes told ZDF television as the German domination of Spain was completed following Dortmund's win over Real Madrid on Tuesday.

"But it is a result one could not forecast," added the former Real Madrid and Athletic Bilbao boss.

"I know the philosophy of Barcelona and my team understood extremely well how to deploy our tactics.

"It was harder than it looked. My team was very focused... we knew what we were up against."

The statistics made grim reading for Barca.

Their biggest aggregate reverse in Europe before Wednesday was by four goals and it was their heaviest Champions League defeat at the Nou Camp since Dynamo Kiev beat them 4-0 in 1997.

They were also unbeaten in their previous 21 Champions League home matches since a 2-1 loss against Rubin Kazan in October 2009.

"We would have liked to play at the same level as Bayern but we can only congratulate them now and get back to work," Barca coach Tito Vilanova, who took over from his close friend Guardiola at the end of last season, told a news conference.

Fabregas was initially deployed in Messi's roving forward role in a three-pronged attack with Spain team-mates Pedro and Villa.