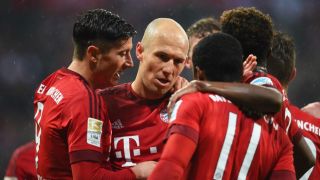 Robert Lewandowski scored a brace as Bayern Munich beat Hoffenheim 2-0 to reopen their eight-point lead at the top of the Bundesliga.

The Pole broke the deadlock for the home side just after the half-hour mark and added his 19th league goal of the season after half-time to secure Pep Guardiola's men a sixth consecutive win in all competitions.

Bayern, who maintained their 100 per cent record at the Allianz Arena in 2015-16, never looked threatened by a Hoffenheim side who arrived in Bavaria having collected just six points on their travels all term.

The scoreline could have become embarrassing for the visitors but for the efforts of goalkeeper Oliver Baumann, who made fine saves from Lewandoswki, Xabi Alonso and Thomas Muller, while Andrej Kramaric fluffed two good chances to level for the visitors with Bayern just one goal in front.

From the kick-off, however, the hosts seemed destined for all three points.

Arjen Robben twice came close to putting his side ahead in the opening nine minutes with two curling efforts from the edge of the box, both of which clipped the roof of the net, while Muller volleyed straight at Baumann from Douglas Costa’s cross in the 17th minute as Bayern dominated the first quarter of the contest.

Hoffenheim struggled to hold onto possession for any meaningful period of time and spent much of the first 45 minutes camped in their own half. Muller danced round two challenges before firing low at Baumann from eight yards out in the 19th minute and Lewandowski could not beat the visiting goalkeeper from a narrow angle after collecting David Alaba's chipped throughball three minutes later.

The relegation-threatened visitors lined up to stifle their free-scoring hosts and their smothering tactics worked until the 32nd minute, when Bayern edged in front. Costa darted down the left and crossed low into the six-yard box, where Lewandowski was on hand to bundle home from close range.

Hoffenheim fashioned a rare chance to get back into the game four minutes before the break as Kramaric found space in the penalty area, but he was denied by Manuel Neuer low at the Bayern stopper’s near post.

The home side were straight back into their rhythm after the break, with Lewandoswki teeing up Alonso, who saw his shot tipped over the top of the crossbar by Baumann, who pulled off another excellent stop from the resulting corner to keep out Lewandowski's header.

Kramaric spurned a glorious chances for Hoffenheim to level against the run of play in the 55th minute, but the on-loan Leicester City striker dragged his shot wide at the end of a swift counter-attack, and Lewandowski punished that profligacy 10 minutes later.

Philipp Lahm picked out his team-mate's with a perfectly weighted pass and Lewandowski obliged with an exquisite chip over Baumann.

Arturo Vidal struck a post with a 20-yard volley as Bayern refused to ease up after scoring their second and Alaba's effort from the edge of the box bounced inches wide, but the hosts were unable to add to their tally in the final throes of a low-key encounter.