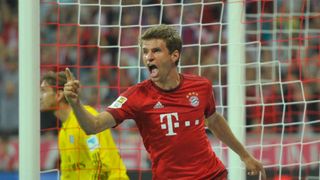 Thomas Muller scored a second-half double and Douglas Costa marked his league debut with a goal as Bayern Munich started their Bundesliga defence with a 5-0 hammering of Hamburg.

Bayern, who won a third straight league title last season, had scored 31 goals in their previous five matches against Hamburg at the Allianz Arena.

And the visitors, who won a relegation play-off to maintain their top-flight status last term, were once again put to the sword as Pep Guardiola's men started their league campaign in style on Friday.

Medhi Benatia opened the scoring when he headed home Xabi Alonso's free-kick during a first half that Bayern controlled.

Robert Lewandowski, who scored in the 8-0 battering in last season's corresponding fixture, then got off the mark for the season with a well-taken goal in the 53rd minute.

And Muller, who netted twice in that one-sided success last term, deservedly put the game beyond reach with a quickfire brace, before Costa – signed from Shakhtar Donetsk in July – completed the rout three minutes from time.

Bayern, who also handed a league debut to Arturo Vidal, spent the majority of the opening stages camped in Hamburg's half, but a stubborn visiting defence initially proved difficult to penetrate.

Arjen Robben went close with a glancing header from David Alaba's excellent cross from deep, while a neat move ended with Lewandowski nodding just over the crossbar from Philipp Lahm's delivery.

Hamburg's resistance was broken in the 27th minute, though, as Alonso's whipped free-kick from the left was diverted home by the head of Benatia and the flag stayed down despite suspicions of offside.

Muller then flashed an effort wide of the left-hand post, before Jerome Boateng's long-range effort stung the palms of Rene Adler as Bayern pushed for a second.

Unsurprisingly, Bayern doubled the lead seven minutes after the restart.

Matthias Ostrzolek's header from Alonso's long ball into the penalty area fell to Lewandowski and the striker coolly slotted his shot into the bottom right-hand corner from eight yards.

Adler made a smart stop from substitute Rafinha, but there was worse to come for Hamburg in the 69th minute. Costa hung up a perfect cross to the back post from the right and Muller ghosted in unmarked to nod home.

Muller was celebrating again four minutes later, with the Germany international calmly rounding Adler to place into the unguarded net.

There was no respite for Hamburg and Costa marked a lively performance by cutting onto his left-foot on the right edge of the penalty area before drilling into the far corner to wrap up a convincing win.