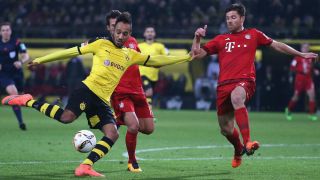 Pep Guardiola's last match in charge of Bayern Munich will see the German champions take on Borussia Dortmund in the DFB-Pokal final on Saturday.

Bayern ended up winning the Bundesliga for a fourth straight season, but Thomas Tuchel's Dortmund kept them honest in the title race until the penultimate week of the league campaign.

Germany's top two now meet in Berlin as both look to seize upon the last chance to secure silverware in 2015-16.

With Bayern having crashed out of the Champions League at the semi-final stage for a third straight season, the Pokal crown would give them a double to send Guardiola out on a high.

Meanwhile, Dortmund need to win if they are to avoid finishing the campaign without a major trophy after former boss Jurgen Klopp's Liverpool knocked them out of the Europa League quarter-finals.

Dortmund defeated Guardiola's side in last season's Pokal semi-finals, but have lost the last two finals against Bayern in 2014 and Wolfsburg in 2015.

That is a run star striker Pierre-Emerick Aubameyang – who has scored 39 goals in all competitions – is desperate to bring to an end, with 100,000 Dortmund fans expected to travel to the capital.

"I think we have got a 50-50 chance – a final is a final and anything can happen," the 26-year-old told the Bundesliga's official website.

"I hope we can win it this year. We have lost the last two years and it is time that we win.

"We have got to see how it goes, but I believe we can do it. While we know it is going to be hard, we simply have to win."

Aubameyang talked up his close relationship with team-mate Marco Reus, while praising Tuchel after his solid debut campaign as head coach.

He continued: "Reus is fantastic, seriously – a top guy. We are on the same wavelength, even if he is a little less crazy than I am! We've got the same mentality and I feel really relaxed around him. We want to achieve a lot together.

"Tuchel has done really well. He's introduced a lot of new things. We have a lot of fun in training and that is really good for us."

At the other end of the pitch, Thomas Muller is eager to send Guardiola out on a high and add to the club's record 17 Pokal titles after he also enjoyed an impressive campaign, netting 32 times, including a team-leading four in this competition.

"If I were a coach, I would ideally leave with a trophy from my last match," he said to Bayern's official website. "Winning the cup is a big target

"Bayern start nearly every game as favourites, but both teams boast excellent quality. I don't think the teams will enjoy a lot of space.

"It will be a bit of a test of endurance, but I hope it will still be a good game for the fans."

On his own impressive record, Muller added: "The most important thing to me is that the players around me – possibly thanks to me – produce their best performance and we win as a team. I know it sounds like a cliche, but it's no use to me if I score three goals and we lose 4-3. I will still be in a bad mood for the whole of Sunday."

Xabi Alonso is hoping to be passed fit as he continues his recovery from bruised ribs, while Javi Martinez (ankle) is another concern. Arjen Robben (adductor) is expected to miss out.

Dortmund, who claimed the last of their three Pokals in 2012, are without Ilkay Gundogan (knee) and Neven Subotic (arm) has not played since March.