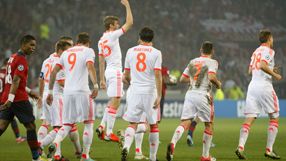 A 12th victory in 13 games in all competitions this season confirmed Bayern can still win in Europe even if they do not dazzle only weeks after a commanding performance against BATE Borisov was not rewarded and the Germans ended up losing 3-1.

A first half penalty was all it took to beat the French side and join Valencia and BATE on six points after the Spaniards crushed the Belarus champions 3-0.

"We have to win such games as well. It was a rough hard-earned victory because we did not play well," said Bayern coach Jupp Heynckes. "But you also need to see the team fight and at the end we deserved to win.

"You could feel there was not much joy in our game and not much running. So sometimes you just have to be satisfied with such a performance because it is equally important to win a game like that."

Bayern, who have reached the competition final twice in the past three seasons, laboured to their second win in the group without their biggest names.

Franck Ribery, who played for the French team's youth academies, was taken off at halftime with a minor muscle injury.

Fellow winger Arjen Robben has been out with a back injury for weeks while their top scorer last season Mario Gomez has not seen any action since surgery in August.

There was no brilliant passing game, no dazzling offensive moves, no high scores that have so far helped Bayern set a Bundesliga record for the best start to a season with eight straight wins.

"This game will certainly not go down in history," Bayern CEO Karl-Heinz Rummenigge said in a late-night banquet for the team and guests. "But it was an important game and an important victory.

"The team did it well, now we have a good starting point and can look forward with optimism."