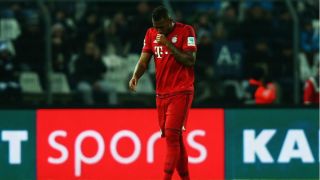 Jerome Boateng will be out of action for at least a week after the Bayern Munich defender suffered a groin injury on Friday.

The Germany international limped off in the 55th minute of Bayern’s 2-1 win over Hamburg, with further examinations set to take place over the course of the weekend.

Robert Lewandowski scored twice to continue the Bavarian’s dominant league form as the Bundesliga returned from a month-long winter break.

Bayern released a statement on their website confirming Boateng's injury.

"Jerome Boateng is doubtful for FC Bayern’s next Bundesliga match against Hoffenheim on 31 January," it read.

"The centre-back sustained a groin injury in the 2-1 victory away to Hamburg and had to be replaced 55 minutes into the contest. A detailed examination will follow in Munich at the weekend."

Boateng has been enjoying the most consistent form of his career this term and signed a new contract in December to keep him at the Allianz Arena until 2021.