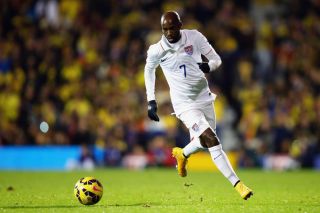 Beasley made the surprising announcement via Instagram after amassing 121 international caps since debuting in 2001 - the fifth most in USA history behind Marcelo Balboa (128), Jeff Agoos (134), Landon Donovan (157) and Cobi Jones (164).

"Where do I start? Honestly I never thought this day would come, representing my country has been the greatest thing I've done in my career," Beasley wrote on his Instagram account.

"Every time I've pulled on OUR colours I tried to represent myself, my family and my country with the utmost respect (and obviously tried to win).

"With that being said, I have officially retired from the U.S. Nat'l team. I've been blessed to be a part of the ussf family for 17yrs.

"I have so many memories from when I started with the U-15 nat'l team all the way to the men's team. I've met so many great ppl along the way I wouldn't know where to start.

"To all my coaches and teammates, I just want to say thank you, thank you for making me the player I am and the man I will be in the future. I will never forget all the games, friendships, memories we all shared.

"One thing I hope you all will say about me is that I was a good teammate and ALWAYS left everything on the field when I played.

"And lastly I want to thank ALL the fans that have supported me and the U.S. Team, without you guys we wouldn't be where we are today! Thank you all!!!"