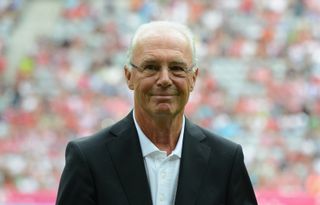 Hoffenheim were left feeling aggrieved in their opening game of the new season as a legitimate goal from Kevin Volland was missed by referee Thorsten Kinhofer and his assistants in the first half of their 2-2 draw with Nurnberg, with television replays showing that the ball had clearly crossed the line.

Markus Gisdol's men were leading 1-0 at the time through a David Abraham goal and - although Anthony Modeste would go on to double his side's advantage - the decision proved crucial, with Nurnberg fighting back to earn a share of the spoils.

Goal-line technology was available during Manchester United's 2-0 win over Wigan Athletic in the Community Shield on Sunday, and will be used during the 2013-14 Premier League season, which starts on Saturday.

However, the German Football League (DFL) has ruled out the use of goal-line technology until 2015.

Beckenbauer - now honorary president at Bayern Munich after a successful career as both a player and a manager - is keen for the DFL to change their stance on the matter.

"We can fly to the moon and do amazing technological things so surely a camera or something can be installed which shows precisely whether the ball has crossed the line," Beckenbauer told Sport-Informations-Dienst.

Beckenbauer's words look set to fall on deaf ears, however, with German Football Association (DFB) president Wolfgang Niersbach insisting all doubts over the technology must be resolved before it is put into use.

"Caution should be exercised before taking such a momentous step," Niersbach commented.

"The technology must be secure."