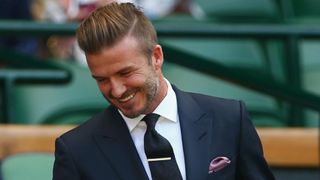 David Beckham insists he always had a good relationship with Alex Ferguson that endures to this day.

Beckham came through the ranks at Manchester United to become a star performer in Ferguson's dominant teams of the mid-to-late 1990s and early 2000s.

The former England captain signed for Real Madrid in 2003 amid widespread speculation that a breakdown in his dealings with Ferguson was a driving factor behind the move.

Beckham has always spoken fondly and respectfully of his former manager since leaving Old Trafford and the two will be reunited at the famous ground for the UNICEF Match for Children on November 14.

Speaking at a press conference to promote the event, Beckham said: "It's very special that Sir Alex is the manager. It wouldn't have been right without him.

"My relationship with him was always great despite what people say, despite the couple of ups and downs I had with him. These things happen."

Beckham reflected fondly on the fear-factor associated with being a young player under Ferguson – something that endures for the 40-year-old.

"It's what made us successful," Beckham said. "I needed a father figure and he was that person.

"The manager still has that hold on us all. I found myself holding my glass of red wine behind my back when I was speaking to the manager recently."

He added: "We have sold 60,000 tickets so far. It's down to the support of someone like the boss.

"Bringing him back to the dugout means so much. I know he'll be excited for this – every time he watches from the stands he wishes he was involved."