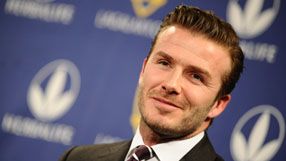 The former England captain, who has been training with Premier League club Arsenal in a bid to retain his fitness, has travelled to Paris to undergo a medical.

Beckham was seen by a Reuters photographer entering the cardiology department of the La Pitie Salpetriere hospital in Paris in the early afternoon.

"On way to Paris, excited. I will update you all later," Beckham wrote on his official Facebook page above a picture of him in what appeared to be a private jet.

PSG manager Carlo Ancelotti's usual pre-game press conference was cancelled on Thursday and replaced by a news conference at the Parc des Princes with the club's sporting director Leonardo and president Nasser al-Khelaifi at 16:00 GMT.

Beckham, the 37-year-old former Manchester United and Real Madrid, is a free agent after leaving LA Galaxy at the end of the Major League Soccer (MLS) season in December.