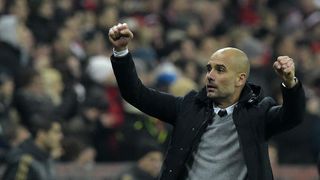 The two men worked together at Barcelona and will do again at the Etihad Stadium from next season, but Begiristain insisted it was Bayern he was not keen to face, rather than Guardiola.

Asked if he was pleased to avoid his future head coach, he said: "Happy to avoid Bayern Munich. Pep is there, but happy to avoid them because also we have met them in the last two Champions Leagues."

Instead, Bayern will face Benfica and City take on French champions Paris Saint-Germain, which Begiristain knows will test his team to the limit.

He continued: "My first reaction was 'wow' but we will do our best, we have confidence in our team.

"PSG are a really tough opponent. They are a very complete side in all aspects, but we are dreaming about continuing. PSG are growing year upon year, they are in the quarter-finals, but they want to get to the semi-finals. We need to recover some players and hopefully we will play a competitive tie.

"It is very difficult to pick a favourite. They have more experience in the quarter-finals. We have to recognise that they are a very good side. They are solid, with great quality, they have pace, great names and great players.

"But also we have to consider that we are a strong team with strong players and we have to try and be solid as them and to compete.

"It is probably an advantage to play second leg at home – you have the atmosphere with you - but it depends on the first leg."