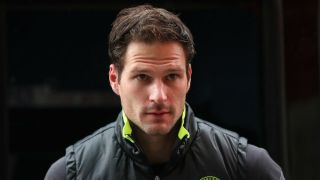 Asmir Begovic became the second player to leave Chelsea on Tuesday as he penned a "long-term" deal with fellow Premier League outfit Bournemouth.

During his two seasons at Chelsea Begovic made 33 appearances across all competitions, keeping 10 clean sheets, and claimed a Premier League title winners' medal as Antonio Conte's side were crowned champions.

With Thibaut Courtois the clear number one for the Blues, Begovic has opted to move to the Vitality Stadium to get regular first-team football.

Happy to be joining . Looking forward to working with Eddie Howe and the team May 30, 2017

"Bournemouth is an exciting, ambitious club which has everything in place for a very bright future," he told the club's official website.

"Being part of a title-winning team at Chelsea was amazing but I felt now was the right time to move on because I want to be playing regular football.

"I am coming into an important part of my career and I want to show people what I am capable of.

"When I spoke to Eddie Howe I knew Bournemouth was the right club for me and I want to bring my experience to the squad, both on and off the pitch.

"I'm really excited to be part of the journey here and hope I can help take the club to another level."

Begovic - a former loanee at Bournemouth - will battle with Artur Boruc and Adam Federici for a starting berth under Eddie Howe, and the Cherries boss is delighted to see the extra competition for places.

"Asmir is an outstanding goalkeeper who has proved himself capable of performing at the highest level over a number of years," he said.

"He is at the right age and the right fit. He is a leader as well and exactly the kind of character you want in the team.

"Asmir will provide great competition to the excellent group of goalkeepers we already have here and his experience will prove invaluable in the dressing room and on the pitch.

"I look forward to him being a very important player here for years to come."