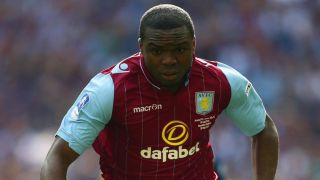 Remi Garde's men were given a huge boost with a 1-0 win over Crystal Palace on Tuesday - their second of the season and first since the opening day.

Despite that result, Villa are still eight points from safety over halfway into the season, leaving them in a dire situation in their bid to avoid relegation from the Premier League for the first time.

But Okore said the belief within Garde's squad was strong heading into the latter stages of the season.

"We all believe we can do it. We wouldn't be here otherwise," he said.

"Against Palace we showed we can work hard, and we have the belief we can get on a run now with two big games coming up.

"If we get something against those two teams then everything seems possible."

Villa's next two league games are against the high-flying Leicester City and away to West Brom.

Okore said Claudio Ranieri's men were inspiration for Villa, who have scored a league-low 17 goals this season.

"They [Leicester] did really well last year. If they can do it, we need to believe we can do it too," he said.

"I don't know about miracles, but it'd be a really big thing. It's something that won't be forgotten in a hurry if we stay up."