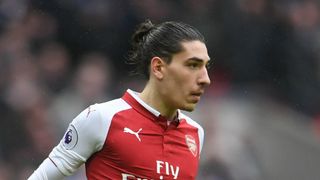 Arsenal star Hector Bellerin believes the people behind the hit YouTube channel ArsenalFanTV are not true supporters of the club, instead "hustling" to make money out of the Gunners' plight.

Arsene Wenger's side are set to miss out on qualification for the Champions League for the second season in a row, sitting eight points outside of the Premier League's top four.

The steady decline of the club - Premier League champions most recently in 2003-04 - has fuelled the rapid rise of ArsenalFanTV, which boasts 670,000 subscribers on YouTube, over half a million Facebook likes and 259,000 followers on Twitter.

Supporter rants published by ArsenalFanTV in the wake of poor results and performances by Wenger's men frequently go viral on social media.

But Bellerin, speaking during an appearance at the Oxford Union earlier this month, said the club's players are not affected by what is said about them on ArsenalFanTV, while he criticised the makers of the videos.

Thank you to for inviting me to speak yesterday! Was a real honour.  February 6, 2018

"I don't think there are players that actually go on the internet to watch ArsenalFanTV," Spain international Bellerin said.

"It does sometimes pop up in your timeline. I see it sometimes. I have friends who say, 'oh, have you heard what that guy on ArsenalFanTV [said]?'

"It's so wrong for someone who claims to be a fan and their success is fed off a failure. How can that be a fan?

"I think they're just people hustling, trying to make money their way, which everyone is entitled to do.

"But for us players, it doesn't affect us. If people want to have fun with it, then have fun. For us, when you grow, you realise what is important to you to listen to and what not to take.

"If a coach comes to me and tells me that I've done something bad or wrong, I'm going to take that advice.

"If someone from ArsenalFanTV says this guy needs to do this or that, I'm not going to listen to him.

"They're entitled to their opinion and the way they want to do it. If people find it funny, then go watch it."

Don't be ridiculous ! If AFTV only profit from Arsenal failure then we would have shutdown a long time ago no?Full Vid: February 16, 2018

"If AFTV only profit from Arsenal failure then we would have shutdown (sic) a long time ago no?"