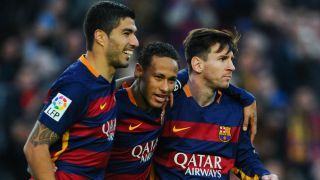 Former Barcelona right-back Juliano Belletti has hailed Neymar's finishing and believes the Brazil international will only get better playing alongside Lionel Messi and Luis Suarez.

Neymar has developed into a key figure at Camp Nou since joining the club from Santos in 2013 and made the FIFA Ballon d'Or podium for the first time in his career following some fine performances in 2015.

Belletti is impressed with his compatriot's efforts for Barca over the past two-and-a-half seasons, but has stressed the presence of Suarez and Messi in the Blaugrana's final third has also played a big role in the 23-year-old's success.

"Neymar can improve even more. At the moment, apart from his great individual performances, Suarez and Messi are helping him a lot," Belletti told Omnisport.

"Being part of this attacking trident has been helping Neymar a lot. Many of his goals started with Messi or Suarez when they saw Neymar in a better position and passed the ball - and Neymar rarely misses a chance.

"They have split responsibilities. When they see one of them in a better position, they pass the ball rather than try to go for glory. That makes the difference.

"In general, all attackers are individualists. Messi used to be more individualist before and the same goes for Suarez. Individualists usually try to dribble, hold the ball longer and take some risks even when a team-mate by your side is in a better position."

Belletti feels the success of Barca's attacking trident is also a consequence of having a player like holding midfielder Sergio Busquets behind them.

"I have to highlight one more thing. There's a guy playing behind these three that allows them to shine with his quality delivery and that's Busquets," he added.

"His technical capacity combined with the talent of those three is crucial and that helps Neymar showing his talent."