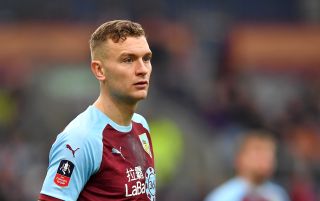 Norwich have signed defender Ben Gibson on a season-long loan from Burnley.

Gibson, 27, who made just one appearance for Burnley last season, will join Norwich on a permanent basis if the club win promotion straight back to the Premier League.

“I’m absolutely delighted,” Gibson told Norwich’s official website. “It’s been a long time coming, I’ve been desperate to play football for a couple of years now and it hasn’t materialised, so a fresh start is exactly what I need.

“An opportunity to come to an aspiring football club that has a clear ambition to get back to the Premier League at the first time of asking – that’s what I’m here to be part of, to play football and get back enjoying it and get this club back to where it belongs.”

Gibson started out at hometown club Middlesbrough, for whom he made 185 appearances in all competitions, and joined Burnley in 2018 for a reported joint-club record fee.

Gibson struggled to force his way into the first-team line-up under Burnley boss Sean Dyche and his only appearance last season came in the Carabao Cup in August 2019.

Norwich were relegated to the Sky Bet Championship in July after just one season back in the Premier League.