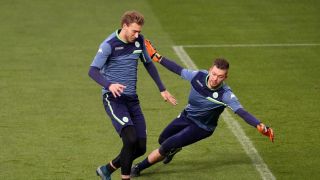 Wolfsburg striker Nicklas Bendtner has dismissed suggestions he said goodbye to his team-mates before the mid-season break, but conceded his situation at the club is "unsustainable".

Bendtner has struggled to hold down a place in Dieter Hecking's side since moving from Arsenal in 2014 and has fallen down the pecking order behind the likes of Andre Schurrle, Bas Dost and Max Kruse.

Recent reports in Germany had suggested Bendtner had waved farewell in December, adding that the Denmark international could be in line to return to Denmark with FC Copenhagen.

While the 27-year-old denied those claims, he hinted at a desire to move on owing to a lack of regular first-team opportunities at the Volkswagen Arena.

"I did not say goodbye to anyone. I play for Wolfsburg and I remain committed to working there," he told bt.dk.

"My situation is undoubtedly unsustainable, but I am in no way released. As long as I have a contract with Wolfsburg then I will respect it."

Bendtner – who has scored nine times in 36 appearances for Wolfsburg – sees his contract expire at the end of next season.